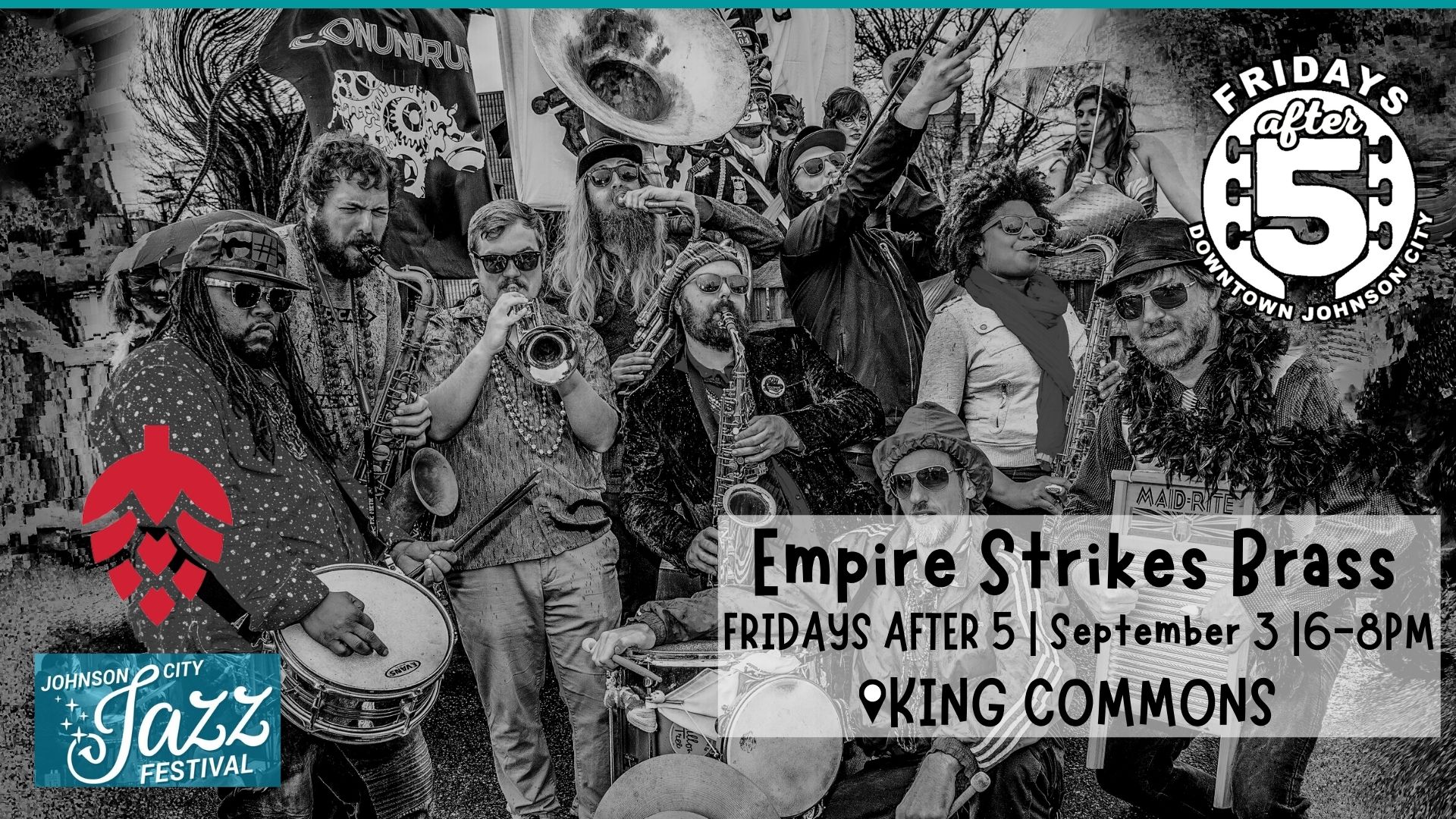 Join us for a jazzy/rock Fridays After 5 in King Commons on September 3 for another FREE outdoor live concert!
Empire Strikes Brass will be taking the stage from 6-8pm with a super special performance sponsored by the Atlantic Ale House and the Johnson City Jazz Festival!

If you are sad to miss the Jazz Fest this year... make sure you come out to FA5 on September 3 for your jazzy fill!

Asheville, NC-based BrassFunkRock band Empire Strikes Brass has a lot to say with a big sound. Their new release is a 10-track album entitled “Brassterpiece Theatre” and it lives up to its name. Chock-full of serious groove from a thumping rhythm section highlighted by lush horn arrangements played by a thick horn section, this 2nd studio album is a funktacular dive into the band’s compositional roots as well as its’ creative and collaborative soul. There’s a lot of depth in these original tunes that speak volumes to ESB’s evolution.

Founded in 2012, ESB has grown from a party band of friends playing New Orleans-originated or inspired second-line and funk tunes with elements of rock and jam. Now, it consists of a collective of players, singers, songwriters, and producers who have found an original sound that fuses their individual musical influences with fresh ideas while still holding true to their foundation.
When Empire Strikes Brass comes together, whether live or in the studio, the sound is undeniably strong and solid. The band’s debut album was recorded at Asheville’s own renowned Echo Mountain Recording Studio was released in 2017. Entitled “Theme For A Celebration”, it was tapped as one of the year’s top 100 releases by WNCW 88.7 radio. ESB’s newest release “Brassterpiece Theatre”, also recorded at Echo, is a fierce followup and both albums are available through all major music distribution streaming, sales and listening platforms.

And if you are still missing the jazz fest, take heart. We are working as hard as we can to make sure it happens in 2022.

We must cancel the 2021 Johnson City Jazz Festival

"It is with regret that we must cancel the 2021 Johnson City Jazz Festival. While the situation is improving, many people would still be at risk in March, and the safety of our performers, staff, and audience comes first. We have again invited all the scheduled performers to play in 2022. Stay safe and stay tuned for other jazz events later this year!"

Organizers of the Johnson City Jazz Festival announced today that they have made the decision to cancel this year’s Festival scheduled for the last weekend in March. “While we are encouraged that the nation and our area is making progress against this virus, we are still not out of the woods,” noted Steve Scheu, one of the founders. “We just felt that for the health and safety of everyone involved - the musicians, the Carnegie staff, and most importantly, the attendees - the best thing to do would be to cancel the event for 2021.” Musical Director Bill Perkins noted he has contacted all the musicians scheduled for the event, and while they are very disheartened not to play for the enthusiastic Johnson City audience, they understand the decision and look forward to the opportunity to play in future Festivals.

Organizers noted that while we are disappointed that this is the best route to take for this year’s event, we want to make sure fans know we are already diligently working on the 2022 Festival. We appreciate everybody who has supported past Festivals and helped bring this great musical genre to our community. We hope you are looking to the next Festival in 2022 as much as we are.

Keep up with the latest news of this and other local Jazz events at this site.

We wish everyone a safe and healthy 2021.